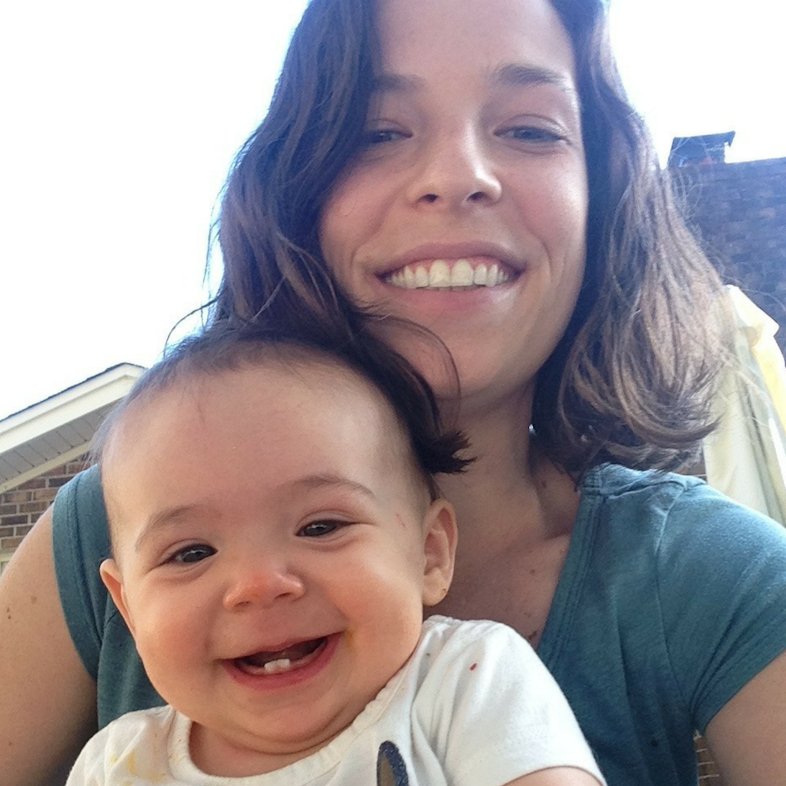 Let me start by saying Clover was a happy, healthy baby–the smiliest little baby you would ever meet. We got almost 10 months of pure love. In the months before her death we were rapidly hitting milestones and had been anxiously awaiting the elusive top two teeth. She was the snuggliest little girl, oh how I miss her snuggles. The three of us were the happy family we had always hoped for and we had so much to look forward to. Or so we thought.

Wednesday, March 26th was a normal day. That night, Clover woke up unable to sleep. She felt warm so my husband medicated her and held her all night in the La-Z-Boy. In the morning she felt warm again so I decided to stay home with her. Despite alternating Tylenol and Motrin, we were unable to get Clover’s fever to break (highest about 103) and she was acting cranky. We took her to her pediatrician who tested her for flu and strep (both negative), and told us she had a virus that was going around. Clover was blazing hot at this point, despite medication. I remember physically sweating from just holding her a short period of time. The pediatrician was not even concerned enough to check a rectal temperature. We went home.

That evening Clover perked up for about 15 min and even ate a little, but that night she vomited 3 times. My husband held her all night again and I was up and down helping with the vomiting episodes; no sleep to be had for either of us. Friday morning Clover was worse and still running a fever. She wouldn’t drink very much and we became concerned for dehydration because she was lethargic and we didn’t see any tears. Clover also would not let her Daddy or I put her down; we couldn’t even move while she was in our arms or she would cry. We called the pediatrician who told us to go to the ER.

Friday afternoon we went to a pediatric ER, a teaching hospital affiliated with a university where we knew we would get the best care. The resident who evaluated Clover seemed concerned because she was mottled but the doctor later came in, pressed on her leg to check her mottling, and said, “This isn’t as bad as the resident made it sound,”–Good news, right?! Tests showed dehydration and Clover was given fluid and medication for nausea. A BMP and urine sample showed dehydration. I did breastfeed her before we left the ER, but Clover was still acting irritable and lethargic but the doctor decided to discharge us home. Upon discharge, Clover still had a fever and her heart rate was running around 170. We were happy they didn’t find anything but, in hindsight, surely something should have been suspicious enough to at least check her blood for infection. No, to home we went.

That evening, Clover vomited again. Throughout the night, she was still cranky and now her right leg became swollen and obviously painful. We went back to the ER at some point early morning/nighttime and the ER physician met us in triage; we immediately went to a room. Clover really looked bad, she had a color that the ER doctor referred to as “doughy” (we had mentioned her pallor on our previous visit). The night shift doctor seemed surprised that Clover was sent home the night before, given her test results. Why couldn’t she have been our doctor the day before?!

Bloodwork and fluids were ordered. This part for me is hard to write about because it’s hard to think about: It took 6 tries for the staff to get an IV. I cringe thinking about my baby being in so much pain and just how sick she was as she would fight initially and then fall asleep as they were digging around trying to hit the vein. Really, how could they not have known how sick she was at this point, fall asleep during an IV?! Clover was inconsolable despite being obviously completely exhausted after the IV debacle. I’ll always remember her poor little cry, and my inability to console it. Also, her heart had been beating so fast for so long. The nurse came and gave her IV morphine and she did rest comfortably for the most part after the pain medicine.

We didn’t get her blood work results until day shift; they showed low white blood cell count (infection) low hemoglobin, and low platelets (59, very low), and bands (infection). Now, in combination with fever and lethargy, this is classic sepsis. But instead of a sepsis diagnosis and treatment, we were told it could be malignancy and that we would be admitted to the cancer/blood disorder unit. We got one dose of an antibiotic (not broad spectrum) for possible skin infection, no other broad spectrum antibiotic and were told we had to wait for a bed on the unit. Meanwhile, Clover’s leg was getting progressively more swollen, severely so, but when doctors checked blood flow in the leg, it was good. So we got maintenance fluids and we waited hours for a bed.

I begin to get more and more worried about her high heart rate, which doesn’t change despite all the fluids and morphine. The doctor tells me that babies can handle these high heart rates. I become more and more worried, I stand over the bed and cry looking at my baby girl laying there, looking so sick. I asked to see the admission doctors as we are waiting around and doing nothing and Clover is not getting any better.

When the doctors arrive, they immediately want to start broad spectrum antibiotics. Clover has developed a petechial rash, small red spots, indicative of DIC and low platelets. I know this is bad, I have seen it before, I feel physically sick with worry at this point. Finally, they redraw Clover’s platelet level and do a Lactic Acid test (for sepsis) which show that Clover is severely septic and progressing to septic shock. I literally can’t stop crying. I am told Clover is septic, but she’ll be okay. I ask about intubation and am told she will probably eventually require it. I still wonder why it wasn’t done sooner. Clover’s blood pressures are becoming progressively lower but I am told it’s from the antibiotic. I know she needs platelets but ER wants to wait until we get to the intensive care unit. My husband and I take her to the PICU (pediatric ICU); we immediately lose a blood pressure on Clover–her blood isn’t clotting. She needs platelets. Her respirations are not effective, she needs intubation. She only has one vascular access line, she needs more. We can’t do central line until she gets platelets. We need so many things and honestly at this point I was hoping it wasn’t too late, but it was. Doctor also gets blood culture result back. It’s Strep.

Clover needs a thousand things at once to save her life. There are issues getting the platelets, issues getting blood, issues getting the norepinephrine drip for her blood pressure. It’s a crazy scene and meanwhile my baby girl is dying. I did at least get to stand right next to my baby girl before she stopped breathing and I swear she gave me once last feeble attempt at smile. That’s my girl, always smiling. In the midst of the chaos, we eventually lose a heartbeat; CPR is started. Here I remember my husband and I crying so hard we can barely stand up straight, I feel like I can’t breathe, but we never leave her side.

She gets lots and lots of epi (adrenaline to start the heart) and we do eventually get a heartbeat. However, intubation has not been effective because Clover has received so much fluid and pink frothy liquid is in her breathing tube. Her skin is cold and a purplish color, not a color of life. Her pupils are fixed and dilated. Let me say, as a nurse, I know it’s over, but as a parent I’m dying on the inside and just want my baby. The doctor recommends we take her breathing tube out and hold her as her heart stops beating. We decide to stop life support so I can hold her. I hold my baby girl as her heart stops beating and I scream in disbelief. Clover was alive and fine on Wednesday; on Saturday, April 1st, she died.

As my shock wore off, hindsight began to set in. As a nurse, every day I feel like I failed my daughter and my brain is constantly riddled with the “what ifs”. But I also know that the doctors and the health care staff failed my daughter. There were so many times when they should have suspected sepsis and she could have received life-saving treatment before it was too late. From the very start, I now realize that Clover had signs of sepsis, but the doctors never even tested her until her last ER visit and, even then, she wasn’t treated for what was obviously sepsis. Clover wasn’t given the fair chance to live. We are now left with a profound sense of emptiness and overwhelming sadness and we know our hearts will never be the same. We are no longer that happy family that had so much to look forward to. We are crushed. I think about those two top teeth that had literally popped through the day she went the ER, I never got to get excited. Now our only hope is that we can use Clover’s story to create change and prevent our experience from ever being another child’s or family’s reality. 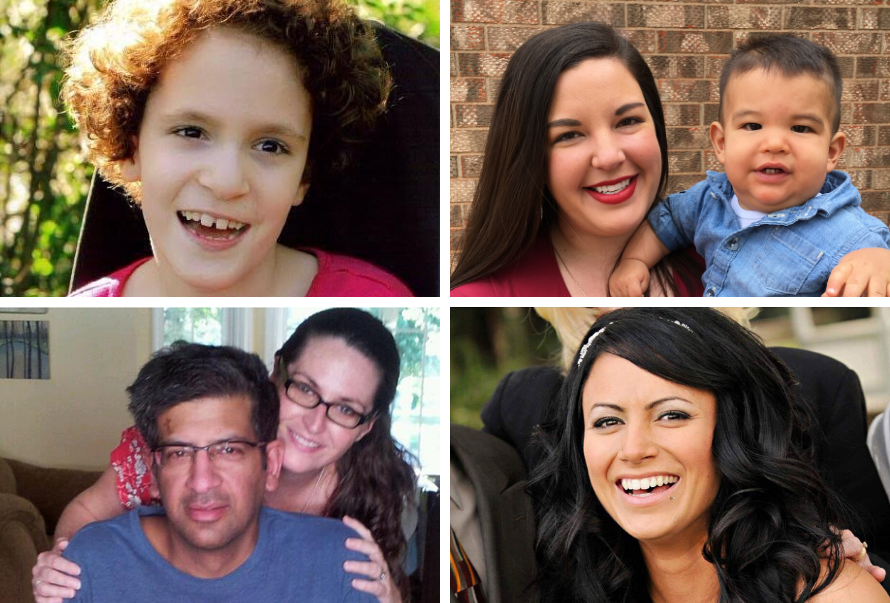